We hadn't visited Thailand until our son and his wife had a baby daughter in 2012. It is a country that once you have stayed there, you want to keep going back! Of course having family there, we will be going as often as we can, but if we had no family ties there we would still want to return, perhaps not as often as we try to now. The only draw back is the time it takes to travel there. We normally take 2 flights each way. Flights normally take about 12 hours, not counting stop off time. We have flown with Air France via Paris. We prefer KLM via Schiphol, arrive at Bangkok. We have also flown with Emirates - stop off at Dubai. Meals on flights are adequate, but not very inspiring, just helps to break the monotony a bit. Living in Northamptonshire we would normally choose Birmingham airport if possible, and for Thai air we connected at Paris. This was due to bad weather in Paris flying with Air France when we had to unexpectedly spend a night at a hotel off airport and the only flight available the following day was Thai Air on a new A380 which was an exceptionally good experience. The Air France desk at Paris airport did suggest we might like to fly to Istanbul to save an overnight stay at Paris, but that would have meant an extra flight, so we declined this offer! They were absolutely inundated with passengers having to re-arrange flights, so we can't complain at all. Long haul flights all have an individual screen in the back of each seat for you to choose from a very good selection of films, games and other programs. Can't fault that at all. The flight maps on screen give a lot of information, constantly updated. Some planes have a camera under the nose so you can watch the terrain you are flying over, fascinating as you descend for landing! Luggage is taken care of once you have checked in at your local airport, and you don't see it until you arrive at the final destination, which makes it a lot easier. Free trollies are readily available at Bangkok airport, so no hassle there. If there is no cloud, flying over the(former)eastern USSR is fascinating - so desolate it looks like the mountains of the moon, and over Afghanistan we could see how difficult it must be for our troops. Once we were over the southern Himalayas, but too much cloud to spot Everest. The city of Bangkok is everything that everyone has described it as - hectic, vital, inspiring, fascinating. A trip along the river on a water bus is something everyone should try, stopping off to view the temples and trying the food - you are never far away from shrimps and noodles. Breakfast was a buffet with an array of European food and local food. Decided to try the noodle soup for breakfast. You choose what you would like to put in the soup mushroom, chillies etc, and it is put into a small sieve-like utensil to cook in the broth for a few moments - delicious. Would never normally have thought of hot food for breakfast when the temperature is 30C, but it seemed to work. The easy way to travel around is on the Sky Train - there is a map that looks just like the London underground, so very easy to follow. We only spent a couple of days in Bangkok as we wanted to travel on to Jomtien to visit family. The beaches are absolutely beautiful, there are so many to choose from, and there are some beaches that the locals know about where the restaurants certainly know how to serve a meal on the beach. They bring tables, chairs and sun umbrellas down to wherever you like. You can be close to the sea, and they are more than happy to bring everything down. These are my favourite meals - very informal and fun. 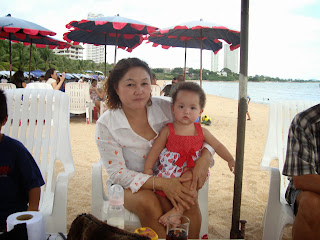 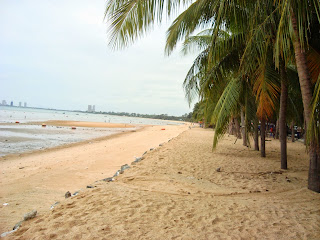 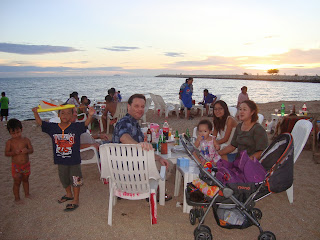 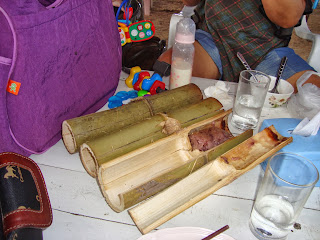 This last photo is a traditional way of cooking sticky rice - very time consuming, involving soaking the rice in coconut milk and spices, straining and then packing this into the top of a bamboo cane and cooking it. The bamboo is the largest I have ever seen - I could barely get both hands around it.
Posted by emmachissit at 3:12 pm No comments: 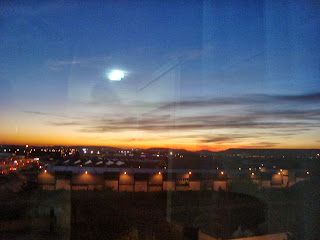 We love visiting the eastern Algarve, as the beaches out of the busy times of July/August are beautiful and quite quiet. The weather is still good there now (October)- 21-28C is normal. Nigh time temperatures are quite good too - around 17-19C ~ We have never had a problem parking right beside the beaches and there is normally no charge. Even in the busy times of July/August the 12 km long beach where Altura sits in the middle is not "filled with bodies". There is plenty of space to spread yourself along the beaches. We have walked from Altura eastwards to Prai Verde and Cabeco, and another day westwards to Manta Rota and Cacela Velha and never encountered a problem. The sand is so fine and every day the beach, which shelves out very gradually, is different according to how the tides have moved the sands around - sometimes leaving sand-bars, lagoons or a collection of shells. 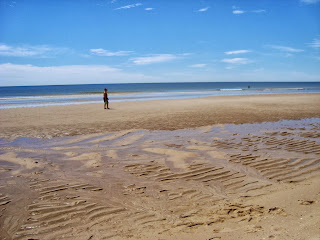 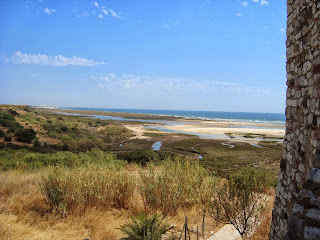 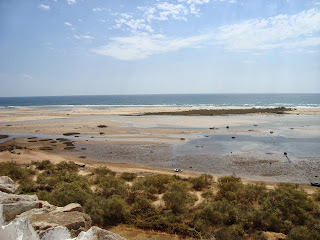 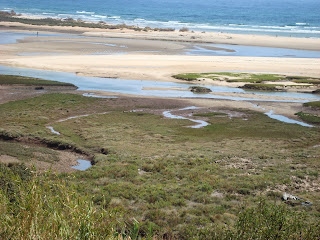 Posted by emmachissit at 12:59 pm No comments:

Visiting European countries, or the Far East is usually a great experience for everyone concerned. The different foods, the (usually) better weather, the sightseeing and the making of new friends all adds to the experience. We have recently returned from a trip to Portugal. We again drove the 1600 miles each way. It was interesting experiencing the change in temperature as we travelled through France, Spain and finally Portugal. The temperature reached 34C as we drove through the hills in Spain. It continued to be 30C even when we arrived in Portugal towards the end of August. We would certainly recommend a holiday in Portugal during end of August/September. Schools go back there around the end of the first week of September, so it quietens down then on the beaches etc. Being British we are used to eating an evening meal at about 6.30 p.m or 7 p.m. This would be considered too early for most European people. We noticed that when we stopped in Spain some restaurants didn't open until 8.00 p.m! The tapas dishes are definitely worth a try. You can sample most parts of a pig (cheek etc).There was something in squid ink, but not sure what it was as translation sometimes not good, but amusing. Tripe is often offered (this is popular as a dish in Portugal). The are so many choices of seafood that you are spoilt for choice and of course it is freshly caught every day. Many locals like to take a couple of hours for lunch outside in the local square. We decided to give it a go, and went to Cacela Velha where we had a beautiful lunch! The food was delicious a starter of crusty bread, olives and sardine paste, then oysters and cockles washed down with a crisp glass of Vinho Verde. This is a lovely restaurant on the east coast of the Algarve. This is not far from where we stay in Altura. The last two photos are of Cacela Velha. We have walked along the beach from Altura, past Manta Rota to Cacela Velha, but there are rather too many steps to climb up to the church and restaurant, so we drove there. It only takes 10 minutes in the car, but rather a long time if you choose to walk! As you walk along the beaches, either toward Monte Gordo or Manta Rota or Cacela Velha, you will find many beach cafes. Most cafes serve orange juice freshly squeezed, and I have never found that you needed the sugar that they sometimes bring you with it. The oranges are so fresh, but vary as some have numerous pips and some have none at all. If you drive around Portugal you are never far from the orange trees or olive trees. There are also many vineyards. This time we decided to do a little sightseeing, nothing too strenuous. We visited a beautiful Palace in Estoi - about 28km from Altura. We also visited the remains of a castle in Alcoutim. This town is situated by the Guadiana River which separates Portugal from Spain 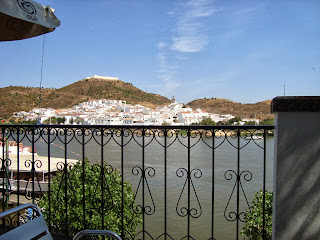 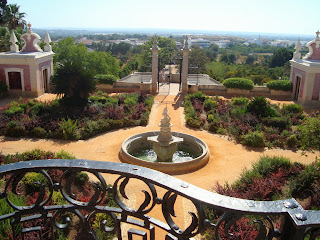 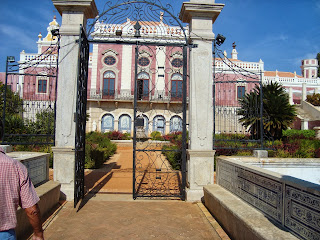 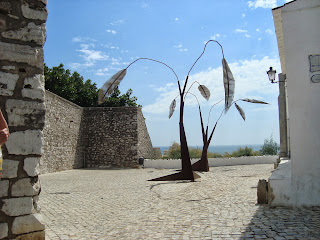 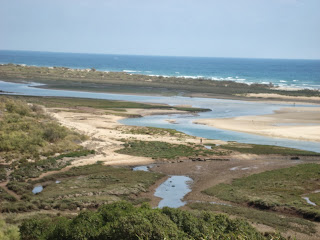 Posted by emmachissit at 3:26 pm No comments:

My original hometown is Northampton in England, and apparently this rather odd local story is currently a big topic all round the world (which I find hard to believe, but there we are):

Northampton Chronicle & Echo World Exclusive: Northampton Clown talks about his appearances
Posted by emmachissit at 11:21 am No comments:

I've just been watching some of the many Disney and Pixar movie trailers in my daughter-in-law Sureephon's YouTube channel and also playing related Disney/Pixar games in the FlashyOnlineGames.com website. A very enjoyable way to spend a spare hour or so!

And that has reminded me that, in addition to all the other great games in the site which I recently blogged about (see here), even more great new games have been added to the site over the past few days, in particular these ones:

Further continuing the series of game recommendations for FlashyOnlineGames.com, here are some of the best Pixar games in the site:

Cars: Mater to the Rescue

(See also here)
Posted by emmachissit at 4:58 pm No comments:

Here are some more game recommendations for FlashyOnlineGames.com, this time featuring the best Disney games in the site:

Bolt: Bolt to the Rescue

Pirates of the Caribbean: Cursed Cave

Pirates of the Caribbean: Depths of the Dutchman

(See also here)
Posted by emmachissit at 4:46 pm No comments:

Thank you to my son Peter for bringing this to my attention, as it gave me a good laugh:

The Ig Nobel Prize Awards 2013
Posted by emmachissit at 8:51 pm No comments:

Following on from yesterday's post, here are some more games based on classic cartoons that can be played via my son Peter's FlashyOnlineGames.com site:

Tom and Jerry: Mouse About the House

(See also here)
Posted by emmachissit at 5:24 pm No comments:

My son Peter has posted something fun in his personal blog for today, Friday the 13th.
Posted by emmachissit at 2:13 pm No comments:

Flash games based on TV cartoons

Continuing from my post in April listing some of the retro computer and arcade games in my son Peter's FlashyOnlineGames.com site, here is a list of some of the games in the site that are based on TV cartoon series shown on Cartoon Network and Nickelodeon:

(See also here)
Posted by emmachissit at 1:03 pm No comments: